About 150 members and guests crammed into Maggie O’Brien’s back room Friday evening to celebrate another passing year and to honor St. Louis-area journalists – union and non-union alike – whose work was judged to be exemplary.  Also on the program and singled out for recognition were United Media Guild activists whose selfless contributions contributed to our Local’s success in 2012.

Five of the six bargaining units in the metropolitan area were represented but of the five out-of-town units, only the State Journal-Register (from Springfield, IL) had a representative in attendance – as Dean Olsen made the drive in with his wife, Theresa, and appeared with Local President Jeff Gordon, who received the ‘Activist of the Year’ award for his work in organizing that newest UMG unit. 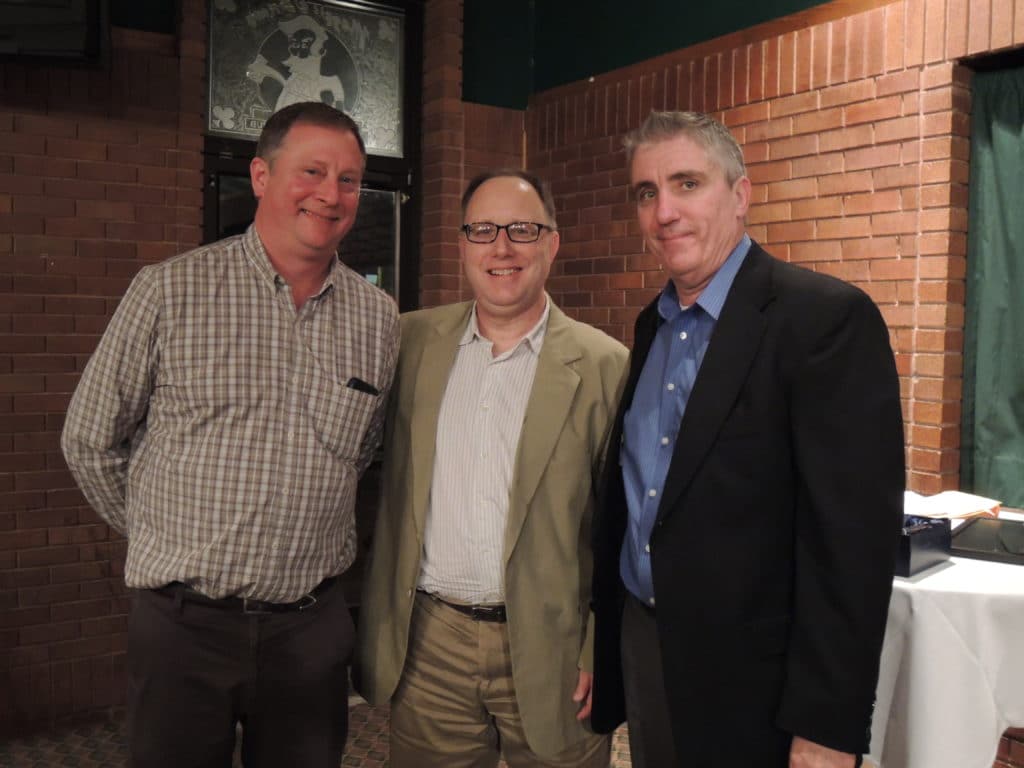 Former Post-Dispatch Unit Chair Deni Fleming was given our Local’s 2012 Solidarity Award for “proving that activism doesn’t end with the job.”  Fleming was laid off in the middle of one of the biggest fights at that paper – one over retiree medical benefits.  During the protracted federal court case Fleming continued to show up at the local, in spite of the fact that she was no longer employed at the paper, sorting through decades-old bargaining notes and building a data base to support the union’s position of what was the original intent of the parties when they negotiated retiree medical coverage.  She also took part in the federal mediation.  And, while our settlement with Lee Enterprises includes a confidentiality agreement that prevents us from disclosing terms, Deni’s actions – along with some excellent testimony by former Local president and our 2012 Steward of the Year, Tim O’Neil – helped bring that settlement about.

Guild Business Representative Mary Casey presented Fleming with her award and cited Fleming’s unwavering commitment to the Guild.  “Deni” said Casey, “can always be relied on to show up and pitch in when there’s a need or to stand with you when there’s a battle to be fought.”

Steward of the Year Tim O’Neil was also honored for his role in a grievance that the Local filed regarding the pension freeze and which took nearly a year before our Local and Lee Enterprises actually came to an understanding on what, exactly, that meant to future retirees who are still working at the paper.  O’Neil was given his award by Vice President David Carson – himself a past winner – who noted that, “O’Neil’s institutional memory is one of our Local’s greatest resources.”  Carson also thanked O’Neil for sharing his knowledge with others, noting that O’Neil has played a role in shaping many others’ activism – including his own.

For the first time in its history, Guilder of the Year was awarded to a non-member.  Barbara Camens, the attorney who represented the Guild in its battle with Lee Enterprises over retiree medical coverage, was flown to St. Louis and given the award for her, “inspired leadership and tireless efforts on behalf of PD retirees.”  Camens, long recognized as one of the more talented labor attorneys in the U.S., spoke eloquently about how unions must often, “take on fights without much chance of success but can still find honor along the way.”  Many retirees were present (some came expressly for the chance to shake Camen’s hand) and she received a standing ovation.

Jeff Gordon spoke of the mediation process involved in the final stage of the struggle and noted that Robert Douglas‘ memory was always fresh in everyone’s mind (Douglas, a former PD newsroom employee who had diabetes and suffered from high blood pressure, died less than one year after he lost his medical coverage).  Gordon then called up Robert’s daughter, Erica, to present the award to Camens.

The Terry Hughes Award – named to commemorate the talented Post-Dispatch columnist who chronicled society’s underdogs and who died of breast cancer in 1991 at the age of 35 – was presented to Post-Dispatch reporter Christine Byers.  The award is bestowed annually to the reporter whose writing, “exemplifies the skill, warmth, passion and humor of the late Terry Hughes, whose columns were full of real life stories that touched us all.”

Byers won for her body of work but the judges specifically mentioned her stories about Anna Brown, a homeless woman who died in police custody. Brown had been arrested after refusing to leave an emergency room, where she had gone because of pain in her legs.  After Brown was arrested police found her dead in her jail cell.

Byers remarked that she was pleased to receive an award named after the late Terry Hughes and stated that she had done research about the late columnist.  She then proceeded to talk about Hughes and her work.  Those in attendance, many of whom knew and worked with Hughes, were moved and came forward afterwards and thanked Byers for her warm and thoughtful remarks.

A surprise was in store for the John McGuire (lifetime achievement in journalism) recipient, since she had no idea she was receiving it (though she became pretty suspicious when she saw her children in the audience).  Jo Mannies, longtime political reporter at the Post-Dispatch – and now covering public policy with the St. Louis Beacon – was given the award, named for the late Post-Dispatch journalist, John Michael McGuire.

Mannies whose work spans decades and included a stint in Washington D.C., has built a vast network of politicos and power players and possesses the reputation of being a straight shooter – one who might be tough but who is always fair. All those in attendance were effusive in their praise of Mannies’ work and congratulated the Local on selecting someone so deserving.

In a serendipitous turn of events, during Christine Byers’ acceptance remarks, she revealed that it was Mannies who stepped up and volunteered to be laid off (a clause in our contract helps keep younger members on the job by offering senior members who volunteer for layoff a severance package that’s based on all their years of service) when Byers was notified five years earlier that she was about to be laid off from the PD (just when we thought we couldn’t love her more!).

Mannies received her award from Ann Lemons-Pollack, widow of Joe Pollack, last year’s McGuire Award winner.  Afterwards, Jeff Gordon presented Ann with an arrangement of photographs of Joe from his days as our Local president.

Guild International President Bernie Lunzer was also on hand and, after offering his remarks regarding the state of our industry in general (not great) and St. Louis in particular (great!), swore in those Executive Committee members in attendance.  Shannon Duffy gave the Business Rep’s Report and Jeff Gordon gave out service pins for members with 25 years or more.

A wonderful night – there’s really nothing better than getting together with union friends at a union establishment and drinking union beer.  See you next year!