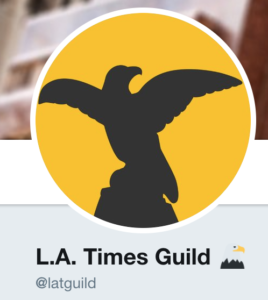 The NewsGuild-CWA is fighting to preserve the craft of journalism and improve working conditions for journalists across North America.

Journalists at news organizations large and small have come to TNG-CWA seeking to unionize. Recently the Los Angeles Times newsroom filed for an representation election for the union with the National Labor Relations Board.

The organizing drive was a collaborative effort between TNG-CWA, CWA District 9 and various local TNG-CWA unions. Among the activists participating in the drive was United Media Guild vice president David Carson, a Pulitzer Prize-winning photographer at the St. Louis Post-Dispatch.

“The Los Angeles Times is a great paper, and it will only be better with a democratic newsroom,” TNG-CWA president Bernie Lunzer said. “This is a chance to have a seat at the table.”